Painting a "Tin Army of the Potomac"

While I still have done little with the hobby, the newest semi flats that were featured in the last couple of posts made me think of a book from the late 1800's, "Tin Army of the Potomac". In the book it is illustrated with drawing of toy soldiers that look like semi flats.  I decided to take some of my Wollner Austrians and paint them as Union soldiers.   I was happy with the result and painted some more. However, I hate painting over figures whose paint is still in good shape. I found some of my earliest home casts, along with a few older figures that had little paint left on them.  They were painted up with Civil War style uniforms.

The result was satisfactory enough that I bought some old battered figures, that I will paint without feeling guilty. 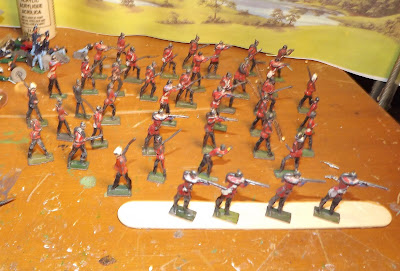 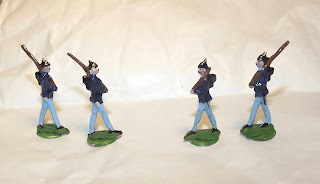 Email ThisBlogThis!Share to TwitterShare to FacebookShare to Pinterest
Labels: Semi flats, Tin Army of the Potomac