Battles of the English Civil War by Mike Lambo

I just received a copy of Mike Lambos' newest solitaire wargame book; Battles of the English Civil War. With  a complete ruleset and 15 battle scenarios for under $20.00, it is a great value. With Mr. Lambo games there are aways some changes in the rules so you're not just playing same rules with some small change to justify charging full price for the same rules.In this game the Artificial Intelligence tends to be more aggressive than other games. Such rules I think would be great in an Ancients game. Also when a unit is hit, it becomes disorganized and starts fleeing the field. There is uncertainty as the unit can retreat different distances based in the roll; then there's the fact you must try to rally before it retreats off the board or is hit a second time, which destroys the unit.

I got my first game in last night, using Peter Laing figures for my units. The battle was Edgehill. The AI were Royalists. And instead of deploying in Edgehill, they mainly deployed at the base of the hill. After my first move, the Royalist cannon fire disorganized one of my pikemen units, which promptly fled the field! The battle was downhill for me from there.

Email ThisBlogThis!Share to TwitterShare to FacebookShare to Pinterest
Labels: A Solitaire Wargame, Battles of the English Civil War, Mike Lambo 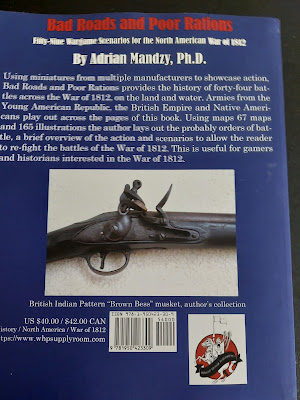 Though I thought it a little pricy, for someone interested in wargaming the War of 1812, I think this book is well worth the price. And  59 scenarios! With a good description of the battle, along with units and unit strengths from skirmishes to large battles, this book could keep a wargamer busy for a long time.

Email ThisBlogThis!Share to TwitterShare to FacebookShare to Pinterest
Labels: Books, War of 1812

While looking for ACW figures, I came across a small lot of Kinder ACW figures, which included a general wearing a chapeau bras bicorne dress hat. The lot was bought, so now the Kinder troops have a well dressed general. 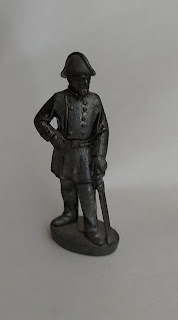 No sooner than I received my new Mike Lambo books on solitaire wargames, than he came out with a new one, "The Race to Bastogne".  In this book you control armor units trying to break through to the encircled American forces in Bastogne. As with his other games, the AI forces are unknown. One feature that's new is "Recon", where a reconnaissance unit can expose enemy units without coming within firing range of that unit; if you get the right roll, of course. Also, in this book Mr. Lambo put unit markers in the back so one can make their own unit counters. For me, I chose to buy new "Axis &Allies" tokens from an online store, Historic Board Games.

Email ThisBlogThis!Share to TwitterShare to FacebookShare to Pinterest
Labels: A Solitaire Wargame, Mike Lambo, The Race to Bastogne

While playing wargames using Mike Lambo solitaire games, I started to think if the scenarios could be used with other rules.  I am thinking along the lines of a hybrid game, where using certain rules in his game would be used, but once contact with the enemy was made, different combat rules would be used. Alternatively, perhaps one Mike Lambo game could be turned into a simple campaign, where contact with the enemy would be shifted to a board, to be played out using other rules.

With this, I did use some of Battlescale hexes to set up the first scenario in "The Fields of Normandy". Below is a couple of shots of the setup.  I also saw on a Facebook group I follow someone using Horoscape hexes to lay out a battlefield, using different color hexes to represent different terrain features.

All in all, if nothing else, Mr Lambo series on solitaire wargames has me playing wargames again ( 8 since I received his games) and thinking of different uses for his games.

This week I have been helping the wife do some gardening. Spread throughout her gardens are garden gnomes. I like teasing her about them, as no one else in the surrounding neighborhoods have gnomes.  I jokingly call her "the neighborhood crazy gnome lady".  While working under the gaze of the gnomes, I was daydreaming of using different time periods or figures for Mike Lambos' different solitaire games. While trying to ignore the gnomes staring at me, I thought it might be fun to play a game using the Peter Pig gnomes.

Ghosts of the Jungle: A Solitaire Wargame

This last week I have played four games using Battles of Medieval Britain (1 win- 3 losses). I have played the first two scenarios twice. While my continued lack of success (I blame poor dice rolls)was frustrating, it's been good getting some kind of wargames in. I also took the time to rebase some Peter Laing figures to use on the board.  I am even thinking of rebasing more of my Peter Laing Medievals to use with later period games.

I also bought Mike Lambos' Ghosts of the Jungle and wanted to try a game. As I don't have any 15mm Vietnam War figures, I rebased some Peter Pig modern African War figures.  I did finally get a game in. I do believe that I made several mistakes in the game. Somehow I was continually interrupted reading the rules.  I figured the rules are simple enough that I could just play through. However, I found myself trying to find how certain rules work. Still, it was an enjoyable game. This particular game doesn't have a limited number of moves; after all you are on a stealth mission where you are trying to accomplish your mission without being detected. 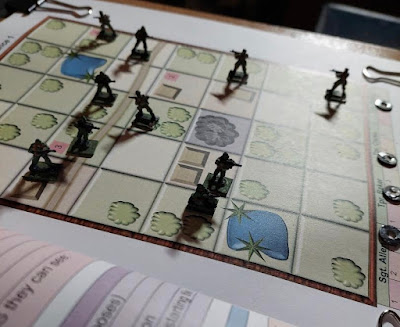 The team has managed to work their way around the occupied village. However, unfortunately they had been sighted several times and suffered injuries ( each team member can take three hits. The Team leader can tend wounds and take away injuries, but you have to get doubles and both figures have to be in a building square). The upper left figure is Trooper Baker, who in the next move made it to the objective.  However, the enemy has managed to form a blocking force across the road. Unlike BoMB, the AI forces can move randomly. By some unlucky rolls (based on what side your on!!) The random dice rolls worked out for the enemy. I didn't see that happening. 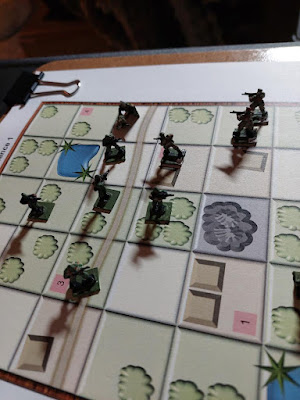 The end of the game. My dice rolls continued to work against the team. The random dice rolls continued to work in the enemy's favor, and they continued to close in on the team. In this game every time the team shoots, it activates more enemy reinforcements. Also, you must roll a 4 to "hide" a team member. My team rolled very few 4s. At this point Trooper Baker decided to backtrack to aid his comrades.  Baker had already taken one hit on this mission. Baker killed one of the blocking force. The rest of the team was getting ready to attack. Only Sgt. Allen hadn't been wounded. However, Trooper Baker was in the open. Two enemy soldiers on the road spot him and open fire. Trooper Baker is killed; the mission is a failure.

At the end of the turn, each AI soldier gets to roll. They can move, fire or Hunt if they roll doubles. Both the managed to roll hits, that killed Baker.

Email ThisBlogThis!Share to TwitterShare to FacebookShare to Pinterest
Labels: A Solitaire Wargame, Ghosts of the Jungle, Mike Lambo

In my last post about these rules, I mentioned that each unit gets to roll a certain number of dice and can use as many of the dice rolls to activate that unit.  I have never used this in a game before. I really liked this system, although it can prove frustrating in a game.

In my first game there was a particular roll that showed how this system can be used. For dice rolls in this scenario if you roll a 1 the unit can form a Shieldwall. Roll a 2,3, or 4 and the unit can move. Roll a 5 or 6 and you can attack.  I will show one units' move below just to show how clever this system can be.

While on Youtube, a video popped up of a solitaire wargame by Mike Lambo. It was a set of wargame rules and scenarios for Beaches for the Brave. It turned out Mike Lambo has written 5 books of solitaire wargame rules and scenarios. I watched three of his videos. I ended up ordering two of the books; "Battles of Medieval Britain" and "Ghosts of the Jungle". The first one is self explanatory, the second follows an Australian SAS team though a series of missions in Vietnam.
The first part of the book explains the basic rules for using the scenarios. The second part has the scenarios. One page gives the charts for the scenario and the goals of the game. The second is the map for the scenario. The opposition is randomly set up. The player get to deploy his forces as he chooses. To move each unit gets to roll several dice, then based on a chart, can use the options from the chart to move his units. He can use as many dice as he chooses. Although in Battles of Medieval Britain the defensive forces can't move, they can engage any opponents in contact with them. Also, as the game goes on, the defenders get reinforcements, you don't. I have only played one game so far. One reason I chose these books is that I can set up a game without figuring out the battlefield layout and units involved. The game I played was set up and played in a little over half an hour. While on the videos Mr. Lambo used blocks to represent the different units, I broke out some Peter Laing figures to use as markers. The one game I played proved to be engaging and fun. In the end I lost; I hope to give it another go tonight and see if I have better luck.
Posted by jhnptrqn at 7:22 AM 6 comments:

A little over a month ago I purchased an old metal toy soldier mold. It was a three figure mold of Prussian SYW fusiliers. I have never seen this mold, but the figures were quite handsome. I placed a bid, which was successful. Unfortunately, the day it was delivered I had come down with a bad cold, which in turn became bronchitis. What's more, I became so dehydrated that my gout flared up in both my legs, leaving me barely able to walk for 3 weeks. However, the miracle of modern medicine got me back on my feet and back to work.

My poor wife, after being my personal nurse for four weeks, was invited to a birthday party, with the added bonus that she got to get away from her problem patient. I decided to try the mold out.

I was surprised that I got some useful figures, as the metal in the pot was low and tends to be contaminated at the end.  The figures themself seem to be about 45mm tall. If they could be molded properly they would be great figures. For me, the mold was bought a a whim and how much use it will get is anyone's guess. 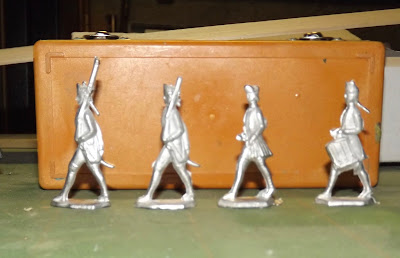