While on Facebook I came across a video game called Totally Accurate Battle Simulator. While not available yet, it is hardly a state of the art video game. In fact, it looks like something from the 90s. If you Youtube  "Totally Accurate Battle Simulator", you can see some videos of the game. It looks like it would be a fun game, although if you are looking for a game to match the title, you will be disappointed. It is very cartoonish and the battles last around a minute. Still, it is a game I would love to play. It reminds me of my "no brain" wargame. This encouraged me to play a game.  I have been working on another set of simple rules, somewhere between "no brain" and Battlelore. I decided to try them out to see how they work.
It is a simple game; nothing new to it. Both sides start out with equal forces; 2 archer units, 4 spearmen units, 2 cavalry unit, one that can be mounted archers. Infantry move one square (or hex), cavalry 2 squares (or hexes). Each unit has 4 men.  Archers have a range of 2.  A unit throws one dice for each figure in the unit. As they lose men, they lose dice. A "5" causes the attacked unit to retreat. A "6" kills one in the unit.  If an infantry unit forces another unit back when next to that unit, it may advance into the vacated square (or hex). If cavalry forces an adjacent enemy unit to retreat, it can advance into the vacated square (or hex) and continue to attack any adjacent enemy unit. In this game think of cavalry as fast infantry. The first army to lose 50% or their general (this is important, as will be seen), they are defeated. 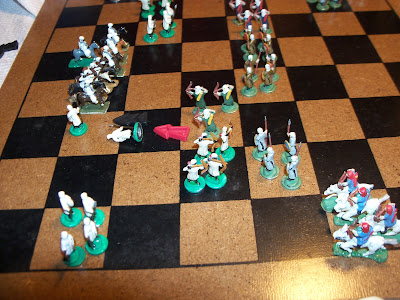 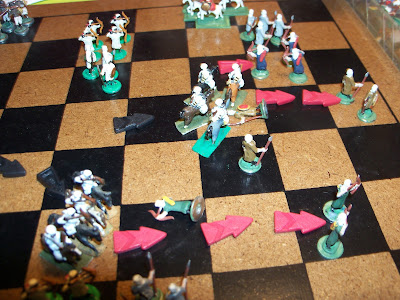 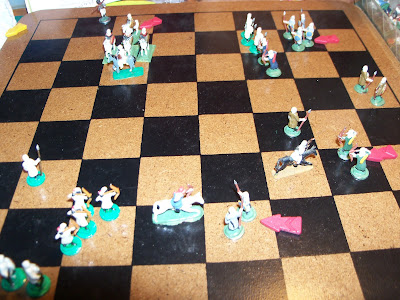 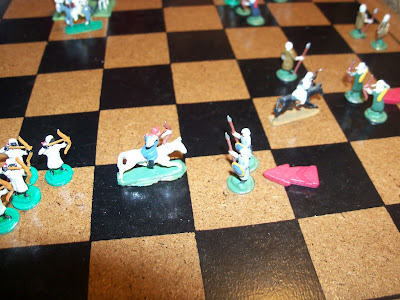 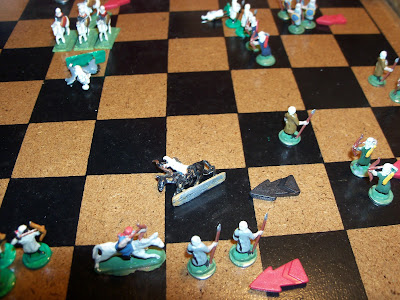